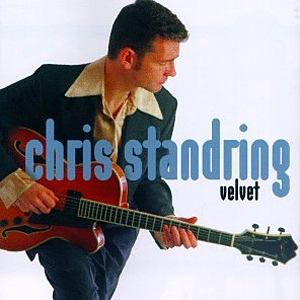 Update Required To play the media you will need to either update your browser to a recent version or update your Flash plugin.

Velvet, the guitarist's first solo effort after the blazing funk effort by Solar System (led by Standring and this album's keyboardist/producer Rodney Lee), is full of glittery synth-created Hammond B-3 and Fender Rhodes flavors, hypnotic synth washes and gentle shuffling grooves, punchy wah-wah harmonies and dreamy, otherworldly effects. If Maxwell could improvise like George Benson, this is what the hybrid might be. Standring waits till the tenth track, "Victoria Road," before giving us a truly infectious electric guitar melody that stands apart from its rhythmic base and doesn't seep into the next song. But the disc seems more about Standring's Benson-like precision and technique, and brilliant vibe-intensive production than just tunes. On standout tracks like "Silhouette" and the sax accented "Sneaky," Standring and Lee effortlessly swirl the electric guitar melody with subtle acoustic harmonies, effective wah-wah kicks and some Crusaders flavored key improvisations.

Nothing to see here. Maybe soon...