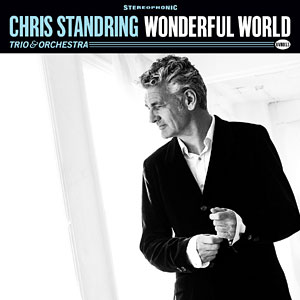 Update Required To play the media you will need to either update your browser to a recent version or update your Flash plugin.

Guitarist, composer, and arranger CHRIS STANDRING is one of the most prolific and successful artists on the contemporary urban jazz scene. With 13 Billboard Top 10 singles and 6 singles that reached number one on the chart, Jazz Monthly has said of Standring, “One of contemporary jazz’s most dynamic and in-demand guitarists, Standring’s sensual chill, ambient soul and retro-groove pop jazz is fashioned around his trademark hip-swaying guitar.” Now, with WONDERFUL WORLD, his 14th release as a leader, he is once again pushing the envelope of taste and style with a project that is wholly different from anything he has done before.

Unlike all his other projects, he composed just one of the tunes on the album and instead concentrated on putting his own unique spin on songs from the Great American Songbook. The album also features a 19-piece orchestra, which is something he always wanted to do. Standring says, “I chose these songs because I love them but also because they could be arranged for a full orchestra or a trio setting. I think there’s something magical about the sound of a guitar and orchestra playing together, but I won’t always be in situations where it’s possible to use an orchestra. So the arrangements had to be flexible enough to work in a trio setting.”

Standring set out to make an album of music that was pared down to its essence. He wasn’t interested in pyrotechnics that would show off his considerable chops. Instead, he wanted to invite listeners in with open trio arrangements and lush orchestrations that would be nostalgic yet updated with a contemporary sensibility.

“The protean, award winning jazz guitarist takes a subtle left turn with some top call pals to serve up a classy, Sinatra era type record… A most tasty tour de force, this sets the standard for standards albums to come.  First call throughout.” - Chris Spector, The Midwest Record

“As you listen to the unleashed urban jazz that guitarist/composer/arranger Chris has put together for you, it will be clear that he is a total expert in contemporary jazz.  Solid guitar licks from Chris on “Maxine” make it (truly) one of the coolest jazz tunes I’ve listened to (yet) in 2021… “Autumn In New York” leads off with some of the most sensual strings you’ve ever listened to, and the “pacing” is pure perfection… a very satisfying performance that you will find yourself listening to over and over (and OVER) again.” - Dick Metcalf, Contemporary Fusion Reviews

“Wonderful World propels Chris Standring’s reputation—indeed, fame—as masterful guitar artist and savvy arranger. Standring’s ability to pare down standards and classics, while never losing the lush quality of the orchestra, is brilliant. Whether it is his composing, his arranging, or his performing, Chris Standring is deserving of careful attention.” - Travis Rogers Jnr, The Jazz Owl